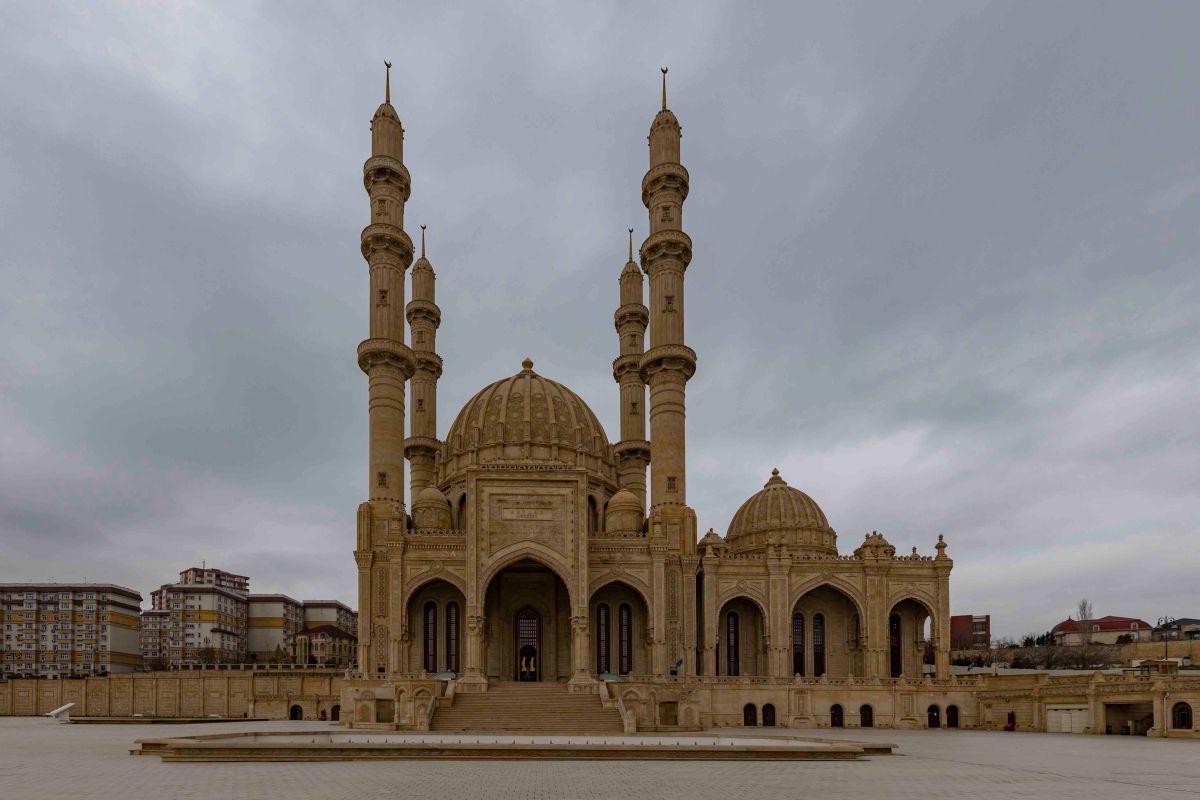 Today was a much slower pace than yesterday. I was quite surprised by how many things I got to see yesterday. I woke up at around 8:00am, and had breakfast downstairs. This time I opted for the “healthy” option, which was cheese, salami, yoghurt, olives, etc.

Even though that today was a slower pace than yesterday, the buildings were very spread out, so I had to spend a fair amount of my time on public transportation. My first stop was Heydar Mosque. I used the metro system to get here. Heydar Mosque is a massive Islamic mosque named after the former President of Azerbaijan; Heydar Aliyev. It was opened in December 2014 and has capacity for 75000 people!

It had already been over an hour since I left the hotel, and I had way too much coffee, so it was time to find somewhere to be. Ahhh yes McDonald’s comes saves the day. The catch is you need to purchase something, so I purchased… another coffee!

After taking pictures of the building I took the metro to Nizami Metro Station, which is the prettiest looking soviet metro station that I’ve ever seen. It has chandeliers everywhere on the platform area. Baku’s original metro stations were built quite lavishly, and were also built very far underground because they were built during the cold war and doubled as a bomb shelter.

I got off of the train at Nizami station and walked to the Azerbaijan State of Academic Drama Theatre. Theatre and dance are integral parts of the Soviet culture, and the theatre was created for a comedy called “Vizier of Kankaran Khanate”. The theatre was completed in 1919.

I then took the bus to check out the Museum of Modern Art. The Museum of Modern Art, opened in 2009, contains 800 pieces of modern art. It was funded by the Heydar Aliyev Foundation. The Heydar Aliyev Foundation has created some joint collaboration projects with the Louvre Museum and the Palace of Versailles. The museum doesn’t have individual rooms, but rather a large central open area where walls meet at different angles, which helps to create a multidimensional perspective of the exhibits. The museum was incredible, and had some hilarious pieces of art.

After visiting the art museum I walked to Military Trophies Park, also referred to as War Trophies Park. It is a public park that contains war trophies seized by the Armenian Army and the Artsakh Defense Army during the 2020 Nagorono-Karabakh war against Armenia.

I was getting quite hungry at this point in time so I purchased a delicious spicy donair from a donair shop called FMD (Flame Manqal Donair).

Right outside of FMD was the bus that I needed to talk to my second last stop for the day, Heydar Aliyev Centre. Heydar Aliyev Centre is a beautiful Neo-futurism style complex that consists of a 1000 seat auditorium, exhibition spaces, a conference center, workshops, and a museum. The wavy white building was designed by Iraqi-British architect Zaha Hadid, and was constructed between 2007 and 2012. The building consists of a multitude of folds that connect various central spaces together in one single continuous surface. It was a very well thought out museum outlining the history of Azerbaijan, and all the wonderful things that Heydar Aliyev has done for his people, and I really enjoyed my experience there.

I then stopped in at the New Karavanseray Art Garden Restaurant for dinner. I had some delicious fresh bread and Dashbura, which is an Azerbaijani chicken soup. It was pretty tasty, and a bit salty, which I liked.

After dinner I took some night time photos. It’s really neat to see the Flame Towers lit up at night, as well as the Baku Ferris Wheel.

The rest of the evening I spent editing photos and blogging. Tomorrow, I jump on a mid morning flight to Dubai!