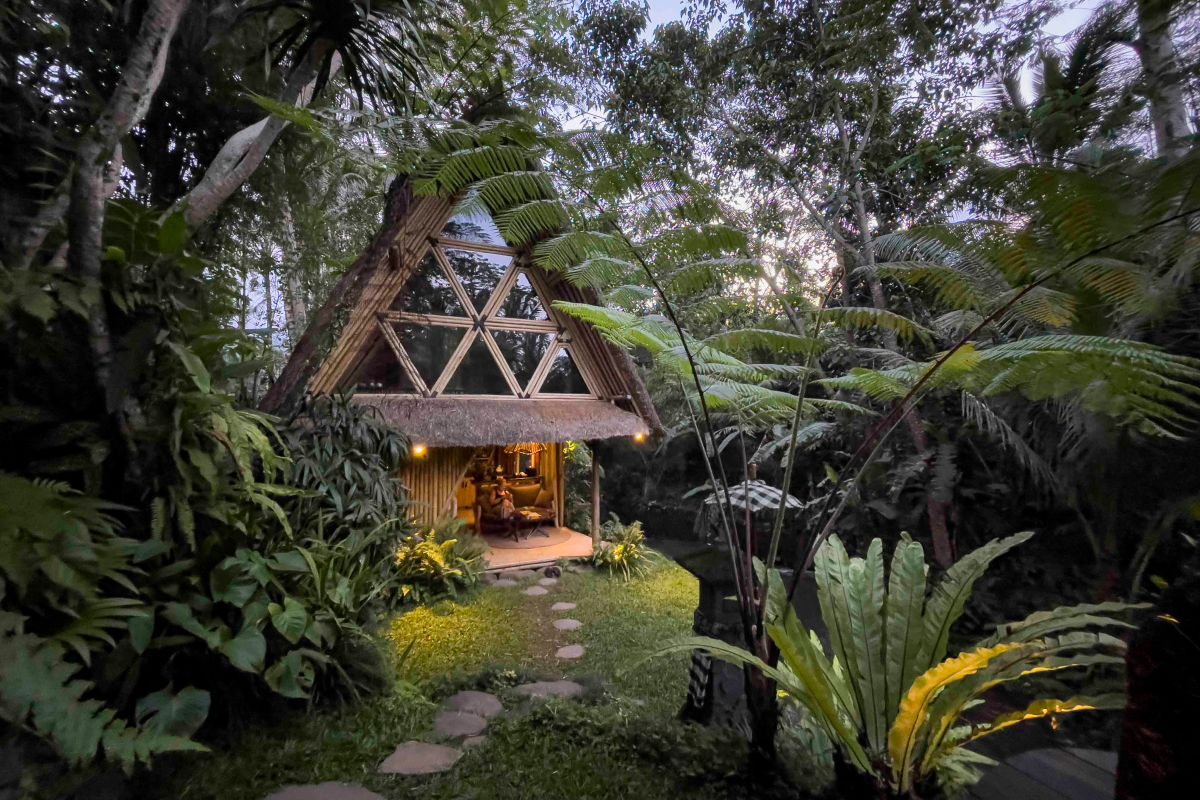 We were picked up for our tour at 8:00am. Our driver’s name was Dawa. The tour started with a 2 hour drive from Uluwatu to a traditional Balinese salt making village. Along the way I asked our driver to stop for more cash, as we were burning through it much faster than I thought we would. The cost of food and entry fee’s has increased significantly since I planned this trip pre-COVID. To make salt the traditional Balinese way, salt water is obtained from the sea in two large buckets, spread over black volcanic sand to filter out impurities, and then the water is placed in cored-out tree trunks that are split in half. This water then evaporates over several weeks, and you’re left with pure sea salt. This is tremendously hard physical labour, but I’m convinced the salt tastes better in Indonesia than it does back at home.

After visiting the salt making village we drove another 1.5 hours to Lempuyang Temple. Lempuyang Temple is a Balinese Hindu temple located on the slope of Mount Lempuyang. Mount Lempuyang is believed to predate the majority of Hindu temples on Bali. The history of the temple is somewhat vague unfortunately. The temple was fully restored in 2001. At the temple you need to park at the bottom, and take a bus up a very windy road to the top. This was supposed to cut down on the amount of traffic, and increase safety, but it was still complete chaos. At the temple I saw a guy proposing to his girlfriend at the temple gates. It was a really cute event to experience. Also, at the temple we got some cute photos taken at various Instagram spots, because why not?

Following the temple visit we stopped by a rice field to get some panoramic shots, before continuing on to lunch at Dewata Agung Tirtagangga, where I had some peanut satay chicken, and Julie had a bunch of massive shrimp. I invited our driver to have some lunch with us, although later on I found out that Balinese people typically don’t eat during the day because they are fasting due to their religion. I think he accepted just to be polite. Oops!

After lunch we drove just a few minutes away to Royal Water Palace (Tirta Gangga). Tirta Gangga is a former royal palace in Eastern Bali. It is named after the sacred river Ganges. The complex spans over 1 hectare and was built in 1946 by the late King of Karangsem, and was almost fully destroyed in 1963 when Mount Agung erupted. Mount Agung also erupted again in 2017, but didn’t cause any damage that time round.

It was now time to check-in to our accommodation for the evening. I booked an A-Frame bamboo house called Hideout Bali, located in Selat. This place isn’t cheap, at $250 USD/night, but its certainly worth it. The A-Frame is situated next to a river, which we ended up spending a few hours relaxing in. The accommodation also features an outdoor rainfall shower, but don’t worry it’s completely surrounded by a luscious forest of bamboo so you do have privacy. This was one of the most enjoyable experiences that I’ve ever had throughout all of my travels. During our stay we had access to staff who would cook us dinner. We ordered some traditional Balinese dishes for dinner, relaxed for a few hours, before calling it a night. All this adventuring certainly doesn’t allow for much downtime to relax, so we’ve been ready to go to bed before 9:00pm most evenings.